Who: VN Editorial Assistant Liz Miller and the rest of the VN gang!
What: World Veg Festival, Day One
Where: San Francisco County Fair Building, Golden Gate Park, San Francisco, Calif.
When: October 3, 2009
Why: Someone wanted to taste test all of the vegan food samples. (It was me.)
The Scoop: A sunny afternoon spent meeting and mingling with vegan friends in Golden Gate Park sounds like a pretty awesome way to spend a Saturday, right? Now add to this not-so-mathematical equation on-site massage therapy, musical entertainment, and more vegan food than you can shake an organic pixie stick at. This, more or less, was the scene at the 2009 World Veg Festival. From our centrally-located VN booth we could take in all the action—and survey lunch options with ease. Our morning and afternoon was spent selling VN subscriptions, selling books (you are what you read!), and making new friends. 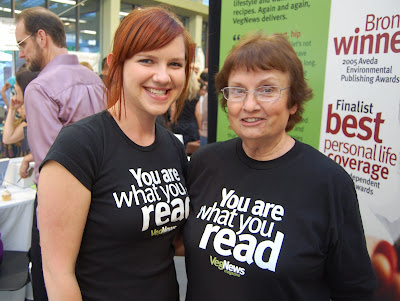 Associate Editor Abigail Young and Assistant to the Publisher Frankie McGee
At 4:00 pm the VN crew split into two groups, one to continue manning the booth, and the other to help organize a VN-sponsored Q&A with wellness author Kathy Freston, conducted by VN Publisher Joseph Connelly. Freston, who famously influenced Oprah's decision to try a vegan diet, is the author of Quantum Wellness: A Practical and Spiritual Guide to Health and Happiness and Quantum Wellness Cleanse: The 21-Day Essential Guide to Healing Your Mind, Body and Spirit. Question slips were distributed to the audience and collected by VN staffers, and ranged from "How do I give up chocolate?" to "What is Oprah really like?" Freston's energetic and engaging personality was magnetic, and her passion for veganism was palpable. After the talk Freston migrated back to the VN booth for a book signing and fan meet-and-greet. Kathy Freston with VN Publisher Joseph Connelly
As the day drew to a close, and with day two still ahead of us, we did some light packing up before heading off to the last event of the day: dinner. And yes, it was definitely an event. Served buffet style, VN staffers stacked their plates to the brim with vegan quiche, Celebration Roast, a sweet-and-savory combo of roasted russet and sweet potatoes, and a big salad. We were lucky enough to share our table with Ann and Larry Wheat (owners of Millennium), Robert Cheeke, Carolyn Scott, Howard Lyman, and Rey Ortega. I was too full (utter failure) to indulge in the apple turnovers and Coconut Bliss ice cream served for dessert, but found them suitably delicious-looking. Check out Sara's entry documenting day two of the World Veg Festival to hear more of the VN team's exploits.
Posted by VegNews Magazine at 9:30 AM

Frankie is the sweetest EVER! I enjoyed meeting & talking with her.