Who: VN Publisher Joseph Connelly and VN Managing Editor Elizabeth Castoria
What: Book Release Party for Tal Ronnen's The Conscious Cook
Where: The Home of Tom & Kathy Freston, Beverly Hills, CA
When: October 12, 2009
Why: To Honor the 2009 Veggie Award Book of the Year

The Scoop: High up on Beverly's hill, around endless curvy, tree-lined, sentry post-dotted streets, everyone who is anyone was present at media exec Tom and author Kathy Freston's exquisite estate, for the book release party of the much-anticipated The Conscious Cook. Celeb chef Tal Ronnen's cookbook is perfection on a plate, stunning in every detail, and raising the legitimacy bar of high-end vegan cuisine to new heights. So why not party? 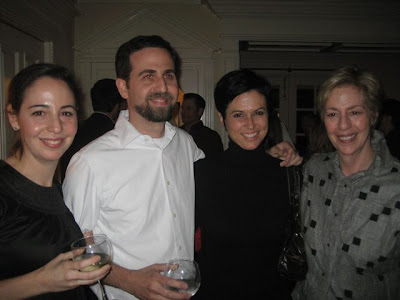 Lia Ronnen, Tal Ronnen, Lisa Lange, Deborah Ronnen
The ever-gracious Ms. Freston joyfully greeted each guest as s/he arrived, opening both home and heart for the occasion (Freston penned the forward to the book). Servers circled with several apps from The Conscious Cook, including Twice-Baked Fingerling Potatoes, Ponzu-Glazed Tofu Crystal Rolls (oops, I had more than one), Quinoa Maki with Avo and Cajun Portobello Fillets, and savory Sweet Onion Beggar's Purses.
Did I mention that the chefs in the kitchen were none other than Molly and Dave Anderson of Madeleine Bistro? Oh yes. And they followed the above with a delicious sampling of Bistro desserts, including itty bity pieces of pecan and pumpkin pies, plus softball-sized vegan doughnuts. Food coma.
While the guests munched and mingled, Chef Tal courteously signed books, gifts of publisher HarperCollins. Next we moved into the living room, where Kathy "presented" the unassuming Tal to the assembled veg glitterati, introducing him as "the most humble, down-to-earth, non-attention seeking man; you have to shove him into the spotlight against his will ... It's like pushing a little bird out of a nest." Tal acknowledged his many contributors, all present, including Dave Anderson ("the best vegan food in the world"), Scot Jones (executive chef at Akron, Ohio's VegiTerranean), Chad Sarno (who opened London's Saf, see review in Nov+Dec's VegNews), Serafina Magnussen (Cook's pastry chef), and Yves Potvin (founder of both Yves Veggie Cuisine and Garden Protein International), "all a part of the book who helped tell this really great story that vegan food is no longer hummus and sprouts." After Tal spoke, Elizabeth and I announced that VegNews' editors had chosen The Conscious Cook as VN's 2009 "Book of the Year."
The presentation over, I was introduced to A Return to Love author Marianne Williamson. Not quite yet veg, she was moved by the evening's happenings and admitted that she was "leaning in that direction." You can do it, Marianne. 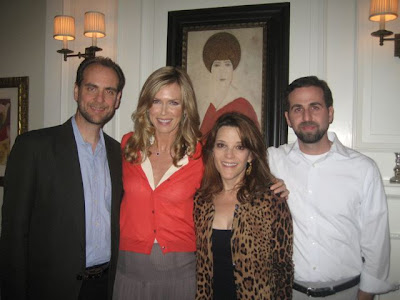 Joseph Connelly, Kathy Freston, Marianne Williamson, Chef Tal Ronnen
And a final word from the man of the hour himself. "You know, the book was something I didn't want to do." The world is sure glad you did, Tal. Thanks.
Posted by VegNews Magazine at 6:29 AM