Who: VN Editorial Assistants Brooke Still and Gabrielle Pope and VN Office Manager Lyndsay Orwig
What: Millennium's Annual Chile and Beer Dinner
Where: Millennium Restaurant, San Francisco, Calif.
When: September 29, 2010
Why: To spice up our Wednesday night ... literally.
The Scoop: When VN asked Gabrielle and me if we would be interested in going to Millennium for their chile and beer themed dinner, I don't think either of us ever responded to an email faster. That is until VN asked us if we would like to try the beer pairings that came with the meal—I emphatically typed YES. So we prepared ourselves for a delicious late-night dinner at San Francisco's classiest vegan eatery. And of course, our beloved office manager and friend Lyndsay Orwig just had to come along for the ride. 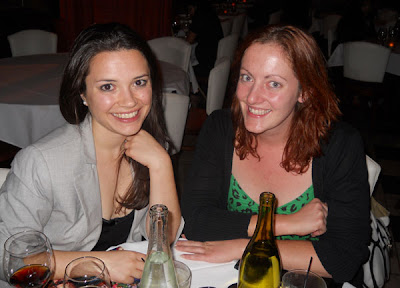 Up until the day of, Gabrielle and I had planned on sitting down to a full night of chili, as in bean-and-tomato-filled stew. Clearly we did not do our homework, because we were treated with instead was a five-course meal based on the multi-faceted tastes of chilies, as in the peppers, from northern California farm Tierra Vegetables, and handpicked by the Millennium staff.
Was there salsa you ask? Oh yes, there was salsa. That and so much more. Our meal began with Seared Chillies and Grilled Flatbread, filled with a white-bean spread and paired with a white beer. Next we had the most savory Blue Corn Mesa Crepe with roasted poblano and tomatillo pozole verde and cilantro salad, matched with a delicious wheat beer. Following that, we were served Steamed Bao, which was probably my favorite course—tea smoked tofu and glazed eggplant atop delicious bread and served with shiitake and mung bean salad. 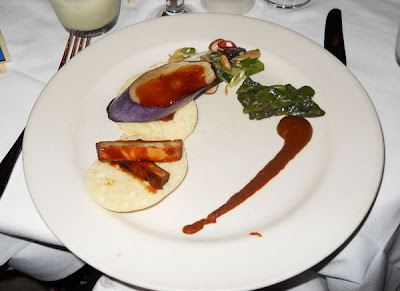 Steamed Bao with Tea-Smoked Tofu and Anise Glazed Chinese Eggplant
We then had Seared Semolina Dumpling, filled with squash and pepper and paired with a porter. We topped off the whole meal with a decadent Chocolate Ganache Cake and Thai chile-Tom Kha ice cream. I think it's safe to say I'll never eat again. 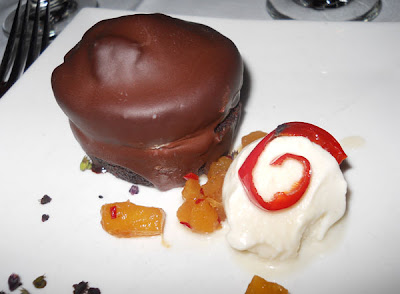 Chocolate Ganache Cake
An amazing meal at a stellar restaurant was my perfect introduction to Millennium, where I plan to return for every special occasion. My birthday's coming up. Just saying.
Posted by VegNews Magazine at 4:04 PM 1 comment:

Who: VN Trade Show Manager Lyndsay Orwig and VN contributor Moira Nordholt
What: Toronto Vegetarian Food Fair
Where: Toronto, ON
When: September 10 to 12, 2010
Why: To hang with fellow vegetarians in our neighboring country up north
The Scoop: Being the Trade Show Manager, I go to a lot of shows throughout the year. They're all great, don't get me wrong, but I was really looking forward to heading to the Toronto Vegetarian Food Fair. I've only been to this culturally diverse city once, which was a treat. I'm very lucky to have a good friend there, Tonya, so I was expecting a great time, and boy was I right!

A couple hours before the fair began, I was able to check out Fresh, a popular, mostly vegan restaurant. The weather was great, so Tonya and I dined al fresco, which was a delight! The most interesting thing on the menu? The Quinoa-Battered Onion Rings for sure. They were so delish, I forgot to take a picture before I devoured them. 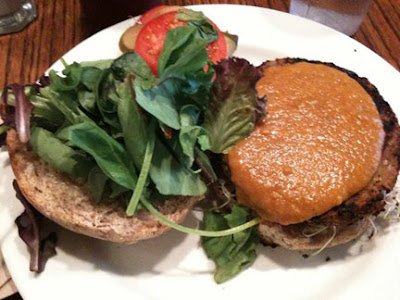 The Deluxe Burger with Coconut Curry Sauce. Yum!
The Food Fair is a three-day show completely free to the public, and includes a ton of vendors, including Gardein, Vitamix, Luna & Larry's Coconut Bliss, and Sequel Naturals, to name a few. It's also located at the Harbourfront Centre, on Toronto's waterfront, which is gorgeous. Not to mention that it's held in the most perfect time of the year, autumn. Being from the East Coast, I miss my seasons, and fall was always my favorite, so it was amazing going back to that, even if it was only for a few days.

The enthusiasm for the vegetarian lifestyle was all around, which is always great to experience, and I met a lot of great people, a couple being strong leaders in the veg movement including Carol J. Adams and Jae Steele. Fun times were definitely had, so much so that I didn't even feel like I was at work. If you are in the Toronto area a year from now, be sure to check out the festival—you won't be disappointed! 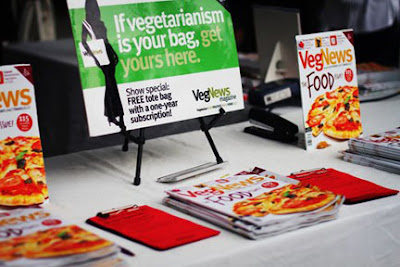 The Food Issue was a big hit!
Posted by VegNews Magazine at 3:56 PM 1 comment: