Who: VN Contributor Matthew Flanzer
What: An exclusive sneak-peek at the new location of one of Southern California’s best vegan restaurants
Where: The Veggie Grill, West Hollywood, Calif.
When: September 26, 2009
Why: Tasting the good life in LA!

The Scoop: My assignment: jet over to Hollywood and check out the invitation-only unveiling of the new Veggie Grill restaurant. There I was greeted by the bright colors and clean lines of this new vegan hotspot, located in prime real estate beneath the hip Laemmle theater and across from the infamous Laugh Factory, right on the Sunset Strip. 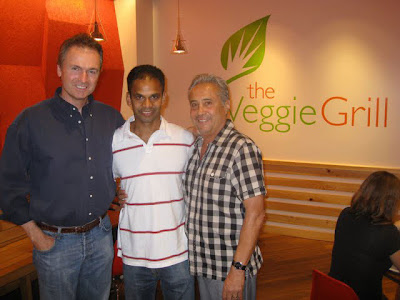 Pressing palms with the founding team of Kevin Boylan, TK Pillan, and Ray White, I was treated to what is clearly the gold standard of this brand of vegan fare: Caesar faux-chicken wrap and mouthwatering sweet-potato fries topped with divinely inspired chipotle sauce. 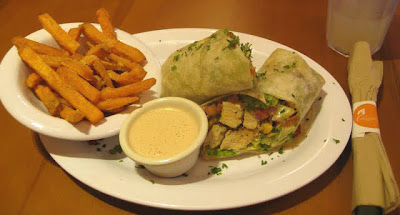 It’s vegan cuisine for the masses, and they’ve never had it so good. General Manager Kelly Greene tipped the evening into the sublime with a sampler tray of delicious vegan desserts: chocolate pudding, carrot cake, and chocolate-chip cookies. Amidst a crowed room of friends, family, and neighbors, this reporter reclined comfortably in his chair. It had been a good day. The new West Hollywood Veggie Grill opened to the public on September 29th.
Posted by VegNews Magazine at 3:21 PM

So excited to check this place out! I only found out about it a couple of weeks ago while driving past on Sunset. Too good to be true.. and too close to my place.. it looks like I'll be going here a lot! Yay!

the red smurgeon of venice said...