Who: VN Associate Editor Jennifer Chen
What: Brewery tours and vegan eats
Where: Bear Republic Brewery, Healdsburg, Calif.; Pyramid Brewery, Berkeley, Calif.; Sushirrito, San Francisco
When: February 18 & 21, 2011
Why: Celebrating my husband's birthday
The Scoop: I plan elaborate birthdays for my husband, Brendan Hay, because I love surprising him. This year, I picked out several breweries in the area for a beer tour since he loves beer. When I saw a blog post on Vegansaurus about Sushirrito, I knew this was a perfect addition to our eating and drinking tour. Sushi the size of a burrito? No brainer. Using the handy guide on Barnivore, I found local breweries Bear Republic and Pyramid both serve vegan-friendly beer. Why isn't some beer vegan? (Read more on Barnivore.) Our first stop was Bear Republic in the lovely town of Healdsburg. The brewery was packed but we were seated quickly. We ordered a flight of their speciality beers (some of which were the El Oso, Heritage Ale, and the Carburetor). My personal favorite was the Cher Ami, a Belgian-style ale, which was light and fruity. A few days later, we spent President's Day standing in line at Sushirrito, waiting for our monster-sized sushi rolls. I got the Buddha Boy Roll, which was packed with avocado, tofu, eggplant, daikon, shittake mushrooms, crumbled rice chips, and cabbage. It was amazing. And for $8, my belly was Buddha-sized stuffed. 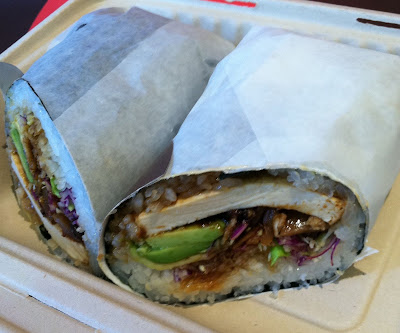 The awesome Buddha Boy Roll
Later, we hopped on BART and headed to Pyramid Brewery. We sampled Pyramid's flight of five beers—Haywire, Apricot Ale, Thunderhead, Live Wire, and Outburst. My favorite was the Apricot Ale because of its refreshing fruit flavor. We noshed on french fries and I ordered a $5 Portobello burger during their happy-hour special. 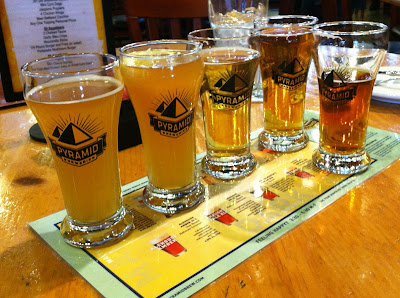 A nice flight of Pyramid brews
We were too busy playing our Trivial Pursuit card game (it's addictive, never leave home without it) to take advantage of the brewery's free daily tour, but we'll be back next time for the Tuesday trivia nights. It's good that we're chatting with Kris Carr tonight at 6pm PST/9pm PST on our very first Twitter VegNews Chat because after this beer tour weekend, I need some serious green juice!
Posted by VegNews Magazine at 10:19 AM No comments:

Who: VN Office Manager Lyndsay Orwig
What: Isa Chandra Moskowitz's Cooking Demo
Where: The Ferry Plaza Farmers' Market in San Francisco
When: February 12, 2011
Why: Being an aspiring cook, I wanted to learn from the very best.
The Scoop: I have been a vegan for nearly 10 years now, but I just recently discovered my love for cooking. Ever since, I've been voraciously reading cookbooks to try and get my skills up to par, and like many vegans, I am a huge fan of Isa Chandra Moskowitz's cookbooks. I honestly can't get enough of her Gigantic Peanut Butter Cookies from Vegan with a Vengeance, or the Chickpea Cutlets from Veganomicon (co-written by Terry Hope Romero). Her new book, Appetite for Reduction, hit shelves earlier this year, and I'm loving the back-to-basics, whole-foods approach that the book has to offer. So when I found out that Isa was coming into town to give a cooking demo, I marked my calendar right away! Also, I'm very sad to say, I had never visited the Ferry Plaza Farmers' Market, so this was a great reason to see it for the first time. 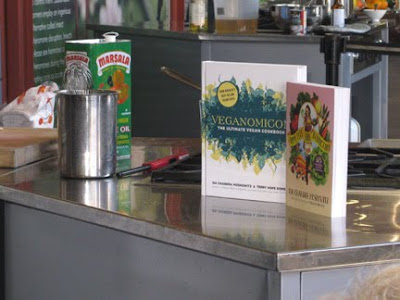 The two cookbooks every vegan knows and loves
It was a gorgeous Saturday morning, and I was running late. Luckily, the farmers' market was running behind as well, because the first cooking demo was still going and I had enough time to grab a spot, even amongst the big crowd. And it was crowded—people were literally fighting for chairs around me, and we were told during the introduction that it might have been the busiest cooking demo yet!

Of course, there was no introduction needed, and Isa was very comfortable with the crowd from the get go, with many funny jokes and witty remarks to keep us smiling. She informed the crowd that her main goal with the cookbook was to teach various cooking skills with each recipe, which is important with a whole-foods diet. So one of the first things she mentioned was how to properly hold a chef's knife, and how to go about cutting and chopping different vegetables. This may sound tedious, but I, for one, realized that I was not doing it correctly—and I thought I was getting so good! She went on to make the Thai Roasted Root Vegetable Curry from the book, as well as the Sweet Potato Drop Biscuits. Unfortunately, due to the crowd, and the fact that I had to head out of town after the demonstration, I was unable to try a sample, but boy did it look good, and I will be making the recipes myself in the very near future. 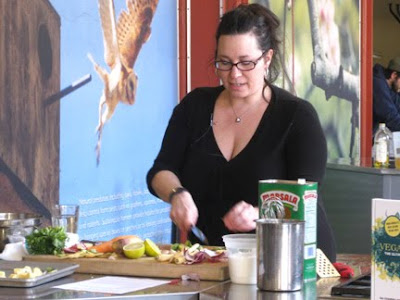 Isa, showing off her knife skills
Isa is currently living in Omaha, NE, but it seems like she does a bit of traveling. Be sure to check her out if she comes to your town—it's a great cooking lesson, and will definitely inspire the chef in you. Also, check out the recent VegNews interview with Isa to hear more about Appetite for Reduction.
Posted by VegNews Magazine at 1:56 PM No comments:

Who: VN Managing Editor Elizabeth Castoria
What: Soup on the street
Where: The corner of 20th and Valencia, San Francisco, Calif.
When: February 9, 2011
Why: Who doesn't want soup?
The Scoop: Sometimes, your friends come up with some pretty great ideas. San Francisco has a fairly bustling underground food scene, and the soup stands are definitely the new taco trucks, which I'm pretty sure were the new cupcakes a week or so ago. How quickly one man's gated gas station becomes another man's place of business! After a few months of living in the Mission District, honorary VN staffer Peter Ryan noticed people setting up little soup stands on various corners, and realized that a) he makes excellent soup and b) can any neighborhood ever really have enough awesome vegan soup? Hence, SF Relais was born! Evidently, a relais is the French equivalent of a truck stop, but better, because it's French. Travelers can stop in for a hearty meal on the cheap and then get back on the road. So, Peter took out the middle man (aka, the stop) and took to the streets (literally) with his killer soup. 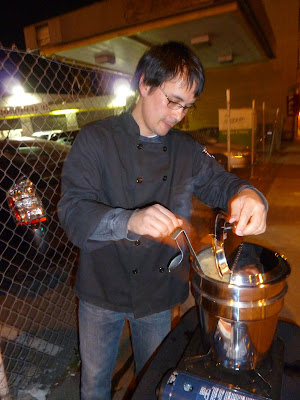 Peter and his now-you-see-it-now-you-don't set up
I stopped by last night to see how the soup du nuit was going. After a slow start, Peter quickly started selling cup after cup of his vegan clam chowdah. The night was pretty chilly (OK, pretty chilly for SF), so I could definitely see the curb appeal of a warm bowl of awesome soup. After only two hours, the soup was gone, the stand was gone, and the corner remained in it's place, as though nothing had happened at all. 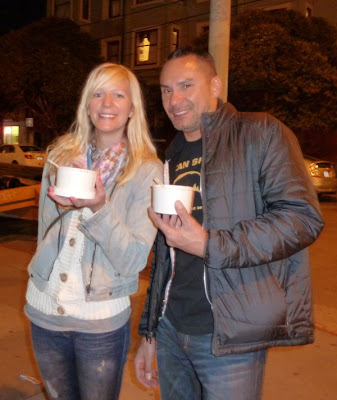 Lindsay and Hermann, a couple satisfied customers
Here's to finding something delicious on every corner! It's what I call a soup-er good idea.
Posted by VegNews Magazine at 10:04 AM 1 comment:

Who: VN Editorial Assistant Anna Peraino
What: "Oprah Went Vegan" watch party hosted by Colleen Patrick-Goudreau
Where: Harvey's Restaurant, San Francisco, CA
When: February 1, 2011
Why: Oprah going vegan = big reason to celebrate
The Scoop: So I guess you could say Oprah is a pretty big deal, right? Right. So then is it an even bigger deal when Oprah (and almost 400 of her staffers) go vegan for a week and devote an entire episode of The Oprah Winfrey Show to it? You bet your Tofurky. When VN asked fellow Editorial Assistant Alexandra and I to attend a watch party, we said yes faster than one of Oprah's Favorite Things sells out during the holidays. A party hosted by lovely VN columnist Colleen Patrick-Goudreau, complete with tasty bites from Local Love and Colleen's own vegan recipes served up by the Harvey's kitchen? Don't mind if I do! 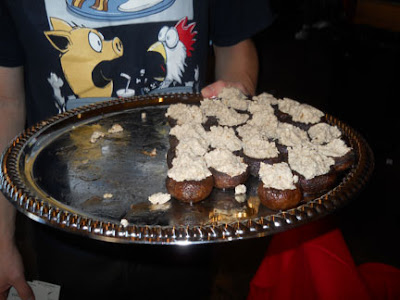 Mushroom caps with walnut paté from Local Love
The place was packed with excited vegan viewers. I heard one dejected onlooker, when finding every seat taken, say "This must be what I get for eating meat!" Watching was a delight--cheers, boos, and laughter erupted throughout, the most exciting of which was the hooplah surrounding Oprah's announcement of Meatless Mondays at Harpo. (Um, awesome?!) During commercials there was a HUGE raffle, with everything from t-shirts to cooking classes. Alexandra and I had our eyes on the Cinnaholic gift certificates but unfortunately fell short. 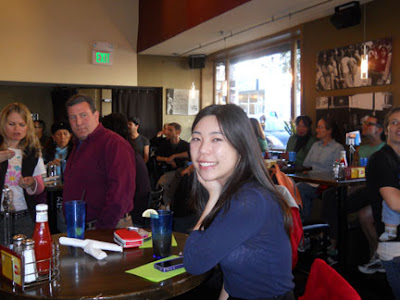 Alexandra and some vegan viewers
The watch party and the episode were both a huge success. I mean, we ended the evening with free cookies from Eat Pastry, including one called chocoholic chunk which tasted like brownie batter. Need I say more? Actually, yes I do: Oprah should go vegan more often.
Posted by VegNews Magazine at 9:41 AM 1 comment: