Who: VegNews staffer in Portland, Lara Bradley
What: Stopping by the 10-Day Cuisine Vegan Fusion Cuisine Cooking Immersion by Chef Mark Reinfeld
When: Wednesday, November 16, 2011
Where: Portland, OR
Why: A chance to meet a well-traveled and multi-talented chef

The Scoop: From romantic Paris to ancient and mysterious Machu Picchu to humble Portland, award-winning international chef and author Mark Reinfeld (founding chef of Blossoming Lotus Restaurant and winner of the VegNews Cookbook of the Year in 2005 for Vegan Fusion World Cuisine, co-authored with Bo Rinaldi), holds his Vegan Fusion 10-Day Cuisine Immersion course in alluring destinations the world over. When he opted for our rain-soaked city, I had the pleasure of finally meeting Mark when he invited me to come to one of his classes. As kind as he is talented, I watched in the background as he gently led his students through the culinary delights of the day, one of three days focused on raw food. When all was said and done, I dined like a queen indulging in sun-dried tomato herb flax crackers, raw un-stir fry with cauliflower rice, raw hot and sour soup, spicy cashews, and a jaw-dropping cashew cheese. Jamaican gingerade, the day's beverage, was a great accompaniment to the meal. 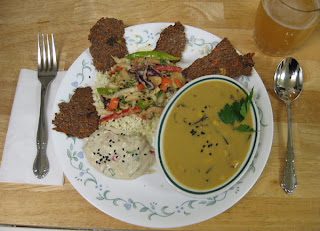 The amazing, totally raw meal!
Just when I thought it could not get any better, the students whipped up a decadent dessert of chocolate mousse (shh ... the secret ingredient is avocado!) topped with macadamia cream that put chocolate mousses I've enjoyed in the past to shame. Then there was the key lime ice cream with strawberry coulis topped with a walnut coconut date crumble. It took me to Nirvana and left me there.

As we were dining, the students spoke of why they took the course and their thoughts of the class that was ending the following day. All remarked how much they learned, how knowledgeable Mark is, and how this was some of the most delicious food experiences they had ever tasted. Some students were vegetarians and vegans, while others were totally new to this healthy and tasty world and excited about their new path. Students walked away not only with fond memories and world-class culinary skills, but also a personalized cookbook of everything prepared, a Vegan Fusion tote, apron, and a nice size professional portrait of Mark and all the students. They were sad their new little community was coming to an end, but excited about their future and looked forward to sharing their new dishes with friends and family.

Moi and Mark
I don’t know about you, but I am already packing my bags for Machu Pichu for the 2012 immersion course and am counting the days until I eat that chocolate mousse again, this time while perched atop a mountain in the Andes some 8,000 feet above sea level, bearing witness to times gone by.
Posted by VegNews Magazine at 2:02 PM 1 comment:

Girlfriends' Getaway at The Stanford Inn

Who: VN Associate Editor Jennifer Chen
What: A vacation with my girlfriends
When: November 11–13, 2011
Where: The Stanford Inn, Mendocino, CA
Why: To spend quality time with my best friends

The Scoop: Every year, my best friends, Alina Kwak and Diana Breen, and I get together for a mini-vacation. While boys are great, there is nothing like a girls' weekend away. My friend Diana has been vegan since she was 15, so I suggested we take a trip to the Stanford Inn, a beautiful and enchanting veg-friendly inn, located in the coastal town of Mendocino, CA.

We arrived on Friday and were greeted warmly by the staff. Plus, vegan chocolate chip cookies were waiting for us inside our room. (And yes, every room gets cookies every day that you stay. My kind of place!) We ate dinner at Mendocino Café, which had several vegan options. The Healing Bowl, with soba noodles, kale, and tofu in a miso broth, was my pick.

On Saturday, we started our day with a warm Vinyasa yoga class, followed by brunch. The Stanford Inn vegan breakfast, complimentary for inn guests, is not to be missed. Everything you could ever want veganized—frittatas, French toast, crêpes—is on this hard-to-pick-just-one-dish menu. I went for the mind-blowing Portobello Benedict. After that, we worked off our brunch with a two-hour canoe trip along the Big River. Then, we hit Frankie's for vegan pizza. You can build your own pie with vegan cheese and a choice of tomato sauce or pesto (all vegan). Believe it or not, the inn also hosts a daily vegan happy hour with free (!!!) dessert and tea or coffee so we hustled back to indulge. 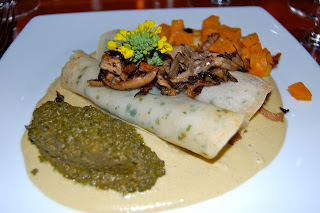 Wild Mushroom Crêpe, filled with spinach, wild mushrooms,
shallots, served with roasted butternut squash
and puréed garden greens on top of poblano créme.
Saturday night, we were excited to try the special five-course wine and mushroom tasting menu at Ravens, Stanford Inn's restaurant, in celebration of Mendocino's annual Wine and Mushroom Festival. Ravens' Chef Sally Owens and Stanford Inn Co-owner Jeff Stanford took the time to explain Ravens' culinary philosophy to my friends and I. Nutritious food is key, as Jeff explained. While each dish was a standout, my hands-down favorite was the mushroom crêpe. It was light and fluffy and the mushrooms were packed with umami flavor. And don't even get me started on the puréed garden greens! 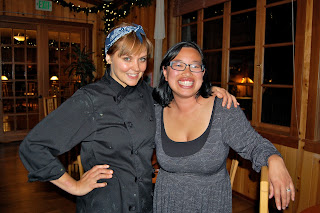 Ravens' Chef Sally Owens, the genius behind the dishes.
Sally and I discussed sharing some of Ravens' best recipes with VegNews Recipe Club subscribers. (If you're not signed up for our free weekly recipe newsletter, head to VegNews.com and sign up today!) I am so excited we will feature the Portobello Benedict recipe in December. It's so delicious that I might have to make it every weekend. Sally also told me that Ravens' will be releasing a brand new cookbook, so stay tuned.

If you've never been to The Stanford Inn, definitely add it to your bucket list. Companion animals are welcome, and you'll see quite a few four-legged guests in the dining room. Daily cookies, a bountiful garden, an indoor salt-water pool, and some of the best vegan eats await you.

Posted by VegNews Magazine at 9:53 AM No comments:

Who: VN Managing Editor Elizabeth Castoria and Team VegNews
What: San Francsico's Walk For Farm Animals
When: November 6, 2011
Where: Golden Gate Park, San Francisco, CA
Why: To support the awesome work of Farm Sanctuary, and get a little stroll

The Scoop: Our lovely and talented associate editor, Jennifer Chen, is magic. She is the kind of person who actually has her life together enough to organize fun events, which she does frequently. A potluck brunch based on an amazing vegan cookbook? Jenn teamed up with Editorial Assistant Anna Peraino to make that dream come true. Dinner parties on the cheap that also happen to be hugely fun? Jenn's an expert. So it came as no surprise when she organized a team for us to participate in Farm Sanctuary's Walk for Farm Animals. 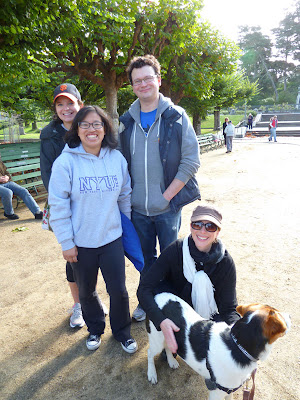 On a brisk Sunday morning, Associate Publisher Colleen Holland, Art Director Sutton Long (and her amazing wonder-pup, Chloe!), Anna, and I joined Jenn and her husband, Brendan Hay, in Golden Gate Park to walk. Farm Sanctuary has been holding walks since 1986 across the US. The events attract stars like this year's spokesperson, Emily Deschanel, and draw thousands of participants each year. All together, the walks have raised nearly $2 million for Farm Sanctuary since the beginning. In addition to getting a little exercise in, walkers get to hear speakers (including Farm Sanctuary Co-founder Gene Baur), enjoy snacks, and raise awareness. We basically couldn't have hoped for a better day, and it was a joy to chat about everything from iPhones (and how they are taking over our lives) to holiday plans (and how we can't wait for the carb-fest better known as Thanksgiving!). It was (another) fun, out-of-the-office event organized by Jenn, and as a team we even exceeded our fundraising goal! I'm already looking forward to next year, and to all the fun things that I'm sure Jenn will organize between now and then. 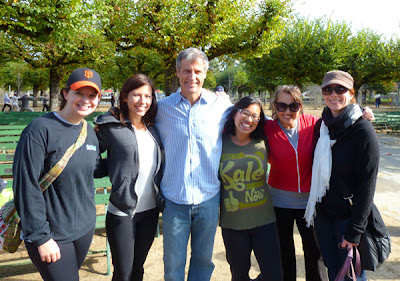 Team VegNews post-walk with Farm Sanctuary's Gene Baur
Posted by VegNews Magazine at 11:59 AM No comments: