Time to Let Live—In Portland, That Is

Who: VN Office Manager Lyndsay Orwig
What: The Let Live NW Animal Rights Conference
Where: Portland State University
When: June 26–28, 2009
Why: To mingle with fellow activists who are fighting for the animals

The Scoop: Let Live is an animal-rights conference in Portland, Ore., dedicated to teaching skills and strategies to aspiring activists—"For anybody who wants to live and let live." It is a smaller conference, but strong with sponsors and speakers from such prominent AR organizations and companies as Compassion Over Killing, Mercy for Animals, and Herbivore Clothing. I was very excited to be the lone representative for VegNews for several reasons. First being that this was my first time participating in an animal-rights conference. Second, I had never visited Portland, and since it was named the "veg city taking over the world" in the November+December '08 issue of VegNews, it has been on my radar for quite some time.

Two nights and two days is not nearly enough time to explore the entirety of Portland, but I tried to fill in as much as I could. After doing a little research, I decided to check out an Italian restaurant called Portobello Vegan Trattoria, which sounded amazing. It was definitely a trek from the PSU campus, but the meal was totally worth it. The Tiramisu alone would have validated the long bus ride. 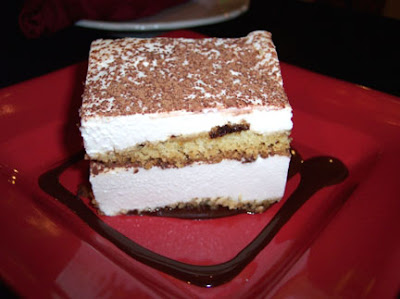 The following day, after another harrowing bus ride, which involved going in the wrong direction for about half an hour, I arrived at the famous vegan strip mall—a group of four stores including Sweet Pea Baking Company, Herbivore, Food Fight Grocery, and Scapegoat Tattoo (yes, even tattoo ink is not all vegan). With little time to spare I went into Food Fight and was bombarded with vegan goods of all kinds. Alas, I only had so much to spend, so I purchased some Eco-Planet non-dairy cheddar crackers (taste just like Goldfish), a Buccaneer candy bar from Go Max Go Foods, and a PROBAR. But these were only snacks, and I was in the mood for a substantial meal, so I walked a couple of blocks and stumbled upon Hungry Tiger Too, which appears to be an ordinary bar, but I was tipped off about it having a completely separate vegan menu, and boy was that true! I did what any normal person would do and ordered a club sandwich with a side of fries. It was all that my heart desired: tempeh bacon, faux turkey, lettuce, tomato, avocado, and Vegenaise. Yum! 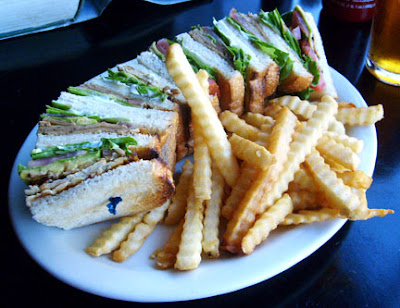 The rest of my weekend was spent at the conference—two days full of back-to-back workshops and speaking events. I was lucky enough to hear VN contributor Jasmin Singer speak about how to use writing to further the cause of animals, as well as hear vegan cookbook-author extraordinaire, Isa Chandra Moskowitz, speak about cooking vegan on a budget. Both were very informative and interesting with a lot of discussion among the participants. The workshops covered a wide range of topics, all centered around honing your skills as an activist, and the enthusiasm for the cause was infectious. There's no doubt that the participants left with new ideas and strategies under their belts. 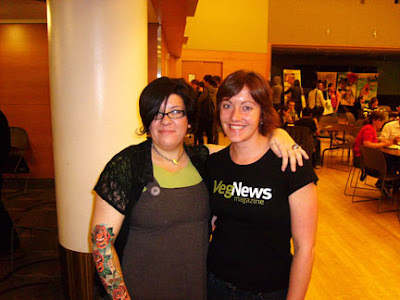 So it was back to San Francisco for me, and though it was a short trip (too short, in my opinion), it was a trip full of excitement, new ideas, and good food. You can't beat that!
Posted by VegNews Magazine at 1:26 PM 7 comments: