Who: VN Las Vegas Correspondent, Blair Stirek
What: Viva Las Vegan! at Vegas Uncork'd
Where: The Encore hotel in Las Vegas, NV
When: May 7, 2011
Why: To experience an all-vegan culinary showcase with some of the nation's top mainstream chefs.
The Scoop: As a long-time resident of Las Vegas, I can say that it's not the most veg-friendly city. So when I first heard about the Viva Las Vegan! event to be held at the very-fancy Encore hotel, I was ecstatic. I’ve never attended a public event in Vegas where I don’t have to constantly ask “what’s in this?” So when VegNews asked me to cover the event, I couldn't say yes fast enough and enthusiastically awaited the big day.
For a bit of background, Viva Las Vegan! is part of the Bon Appétit magazine-sponsored Vegas Uncorked, a who's-who gathering of top chefs around the country who take over the city to cook, eat, and schmooze. Steve Wynn, a successful Vegas hotelier, is a passionate vegan and arranged to host a Saturday afternoon event to showcase meat-free cuisine. Joined by celebrity vegan chef Tal Ronnen and a handful of five-star chefs, the goal was to educate the industry on how delicious and cutting edge vegan cuisine is. 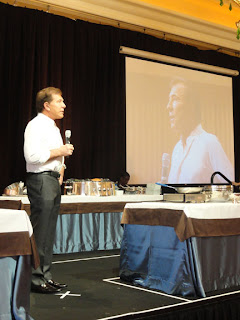 Hotelier Steve Wynn takes the stage at Viva Las Vegan!
As attendees entered the Beethoven Room at Wynn's Encore hotel, we were greeted with cosmopolitan cocktails and glasses of sangria. I immediately started chatting with Cupcake Wars' winner and owner of Sticky Fingers, Doron Petersan, and the Humane Society of the United States' Director of Online Communications, Grace Markarian. Both mentioned their love for VegNews, so I was even more proud to be representing the publication at this first-of-its-kind event. 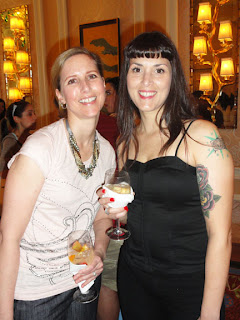 HSUS' Grace Markarian and Sticky Fingers' Doron Petersan
Soon, Steve Wynn took the stage. I couldn't help thinking to myself, "This is Steve Wynn! Of the Wynn hotel! Oh, and he also owns the Encore. No big deal." But then my thoughts switched to how this man single-handedly has the ability to turn Vegas into a veg paradise. He shared how he went vegan (a friend gave him a copy of the film, Eating, while yachting in St. Tropez), how he's educating his 15,000 employees about veganism (by giving them all copies of the video), and how he is now offering completely vegan menus at all of his Vegas restaurants (including Botero, Lakeside, Society Café, Stratta, SW Steakhouse, and Wazuzu). His co-host, Ronnen—celebrity chef to Oprah Winfrey and author of the best-selling, The Conscious Cook—then took the stage. Ronnen has been hired by Encore to work with Wynn's restaurant chefs to help create the vegan menus. Then it was time to eat!
Six of Wynn's restaurants were in attendance, and each offered at least two dishes. I sampled pasta and clams (garganelle pasta in a kombu broth with broccoli rabe, sweet peppers, and oyster mushrooms) from Botero, roasted tomato bisque and a tomato salad with cashew cheese from Society Café, Crispy Gardein Milanese with arugula, fennel, and marinated tomatoes from Stratta, vegan clam chowder (a cashew cream base with smoked oyster mushrooms) from Lakeside, and veggie dim sum and sushi from Wazuzu. The dessert stations offered up "peaches and cream" with a crunchy peach cylinder, sangria-soaked peaches, and a citrus-soy rice cream, along with a classic carrot cake with pineapple marmalade and walnut tuile cookie. I finally found heaven in Vegas. 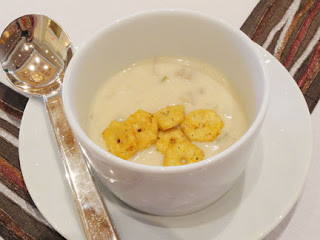 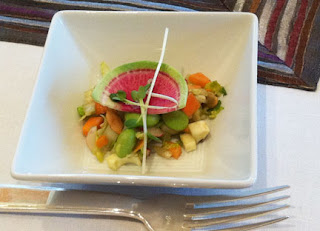 The beautiful (and delicious) chopped market salad by Chef Kim Canteenwalla of Society Café
And there's more! All of the chefs demonstrated how to make each of the dishes, and the guests received recipe cards for each dish to take home.
Vegas is quickly changing, and I encourage all VN readers to visit this budding vegan paradise. I'll be attending Vegans in Vegas in two weeks, and I hope to meet you there! 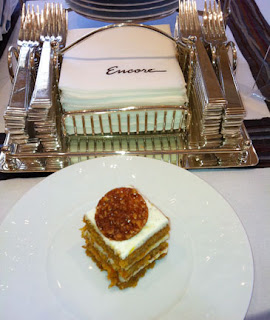 The perfect ending to a perfect day: a classic carrot cake by Chef Kimberly Valdez of SW Steakhouse
Posted by VegNews Magazine at 2:16 PM

For a beginner, you might seem intimidated looking through Chef Tal´s book, but put away that intimidation and dive right in! I have made some great recipes. This is awesome that he is going to be in Las Vegas. It will be a health twist turning the attention from the flesh market to the Vegan market. Way to go!

Vegas has always been one of my favorite places to go to and now that there are so many more vegan options I can't wait to go back.

Great article. Once I read that The Wynn hotel restaurants in Vegas had vegan menus, I've planned a birthday bash for my husband in the Spring, and you know where we'll all be staying! Amanda Erickson (The Peaceful Table)

The presentation of those dishes look amazing; especially the chopped salad. Would love to go vegan but unfortunately lots of vegan foods contain soy which I'm allergic to.

I have been visiting various blogs for Press Pass. I have found your blog to be quite useful. Keep updating your blog with valuable information... Regards