A Bit of Southern Comfort

Who: VegNews Office Manager Lyndsay Orwig, the rest of the VN Crew, plus a special guest
What: The annual Southern Comfort dinner
Where: Millennium Restaurant, San Francisco, Calif.
When: Wednesday, May 25, 2011
Why: We just can't get enough fried, comforting food.
The Scoop: For those who are familiar with Millennium, their annual Southern Comfort night is something to look forward to all year long. It's also the one time in the year when the restaurant may be a little more casual than usual—plaid and mullets are in abundance, as is the beer. So we at the VNHQ were very excited when VegNews Publishers Joseph Connelly and Colleen Holland invited all of us to this special dinner. We were also extremely thrilled to have a special guest join us—former VegNews Editorial Assistant and VN Contributor Melissa Feineman, who is now living in the SF Bay Area once again!  Delicious food and friends—what more could you ask for? 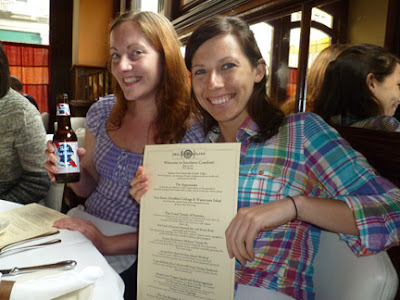 Lyndsay and Elizabeth having a good time
Shortly after our arrival, we were served a big bucket of a variety of beer, including such classics as Pabst Blue Ribbon (my personal favorite), Schlitz, Olympia, and Miller High Life. Then came the bread—homemade biscuits, oat-molasses bread, and jalapeño-scallion cornbread to be exact—served with an amazing smoky pecan spread. And that was just the beginning of the appetizers! We were then served Becca's Chili Fries with papadzul, Danielle's Deep Fried Kosher Dill Pickles, and Black-eyed Pea Chow Chow. This was our idea of heaven, but then we were given the third part of the appetizers, which blew our minds—a shredded cabbage and watercress salad with strawberries, spiced almonds, tempeh bacon, and poppy-seed dressing. 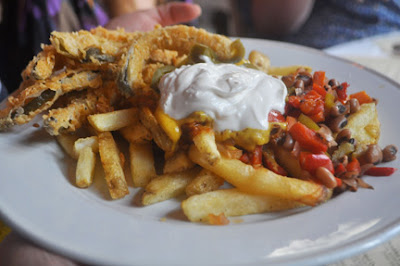 The amazing appetizer—chili cheese fries,  fried pickles, and black-eyed peas
Did I mention that those were just the appetizers? The choice of entrées was up next, and boy was it a hard decision to make! Here were our choices (see if you can decide): a Steamed Beer and Kraut Brat with your choice of toppings, including but not limited to cheese sauce, chili, and pickled mushrooms; Tammy Fae Gomez's Midwest Tamale Pie; Jersey Diner-Style Ketchup-Glazed Meatloaf, served with mushroom-bourbon gravy, and sour-cream-and-chive smashed potatoes; Alice's Buttermilk Fried Chicken Sandwich, with cilanto-red cabbage slaw, mayonnaise, Yucatan Diablo Sauce, and a French bread roll. It was a very tough decision, to say the least, but the chicken sandwich was the big winner, and the meatloaf was a close second. 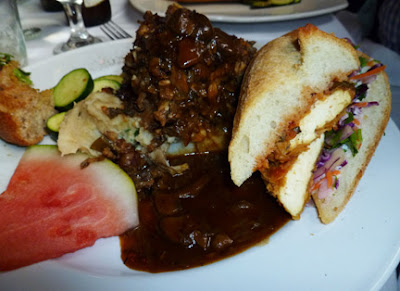 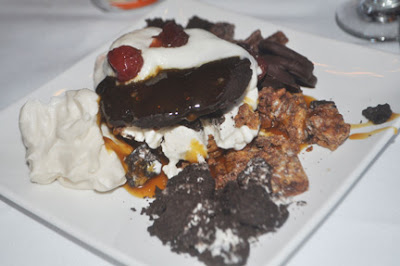 Straight from the ice cream sandwich bar—delicious!
We were completely stuffed, but you can't attend Southern Comfort night without fitting in the dessert. And this was no ordinary dessert, but Anne's Ice Cream Sandwich Bar! First, we had a choice of Oatmeal Raisin or Chocolate cookies, but most of us picked one of each. Then we had to choose two fillings to be mixed with the vanilla ice cream, including chocolate-covered pretzels, sprinkles, chocolate chips, brownies, Newman O's, chocolate-peanut butter rice crispy treats, pralines, and rice mellow. Finally, we were able to go crazy with the toppings, which included maraschino cherries, fudge sauce, caramel sauce, strawberry-chipotle sauce, and vanilla bean cream. The decadence nearly killed us, and it took us a little while, but we were finally able to stand up and say our goodbyes. Our satisfaction had hit 100 percent—that is until this morning when the waiting began once again for this amazing dinner! To check out more photos, just go to our Facebook photo gallery.
Posted by VegNews Magazine at 2:32 PM

Well, bless your little hearts. I'm glad y'all had a blast, but this is pretty much the furthest thing (thang) from a real southern comfort dinner. Seriously gang, just change the name to Diner Night so you'll stop *totally misleading* West coasters about what we deep south vegans really crave. With love & hugs from Atlanta.