Who: Managing Editor Elizabeth Castoria and most of the VN crew
What: Vida Vegan Con, the world's first vegan blogging conference!

Where: Portland, Ore.
When: August 25 to 28, 2011
Why: Why would we miss a first-of-its-kind event that combines media, awesome people, and fantastic vegan food?
The Scoop: When there's a totally vegan blogging conference held in the vegan mecca that is Portland, Ore., you go. That's all there is to it. The VN team first heard about Vida Vegan Con last year, and we've been eagerly anticipating it ever since. Finally, this past weekend, our excitement reached a fever pitch as we left the office on Thursday afternoon and headed for the City of Roses. Once the wheels hit the tarmac, we were off and running.

Our first stop was Vendetta, a cute bar with a lovely outdoor patio where a group of VVCers were gathered. Let's just say that we wasted no time in mingling among the very awesome attendees. 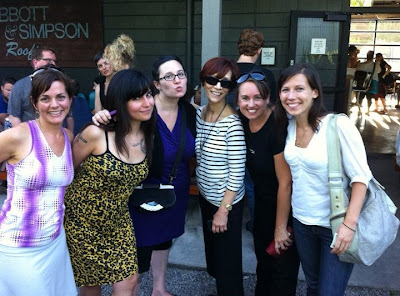 Allison Rivers Samson and Terry Hope Romero, Isa Chandra Moskowitz, Fran Costigan, Colleen Holland, and me! (Photo via Allison Rivers Samson)
Yes, that is an all-star lineup if I dare say so myself. In the background you can see The Oregonian's Grant Butler, Native Bowl's Julie Hasson, and the flaxen locks of VN contributor Dynise Balcavage. Not a bad way to kick off a conference, if you ask us! After chatting for a bit we rushed over to a sneak peek screening of Vegucated, hosted by the film's creator Marisa Miller Wolfson.
Friday we spent galavanting around Portland. Our first stop? Duh, the vegan mini-mall. We met up with Michelle from Herbivore Clothing Company at Sweetpea Baking Company for some morning grub. Bagels, scones, bars, and big, strong lattes were in order. After stuffing ourselves and chatting, we headed to Herbivore to peruse the goods. Hello, adorable animal-rights themed hoodies, buttons, stickers, and more! We could have easily walked away with one of everything from Herbivore, but the most popular purchase was actually this cool One Line a Day: A Five-Year Memory Book, which three of us on staff picked up. Then, we stopped at Food Fight! Vegan Grocery. We were like kids in a literal candy store. I couldn't resist grabbing a handful of Crazy Rumors Lip Balm, a packet of JJ's Sweet's Cocomels in Fleur de Sel, and a couple of Halo Bars for Assistant Editor Anna Peraino, who wasn't with us on the trip and freaks out for them. Is there any greater joy in life than freaking out your coworkers with surprise treats? Heck no. Friday night we headed back to the hotel for a kick off Champagne and cupcake reception, which VN hosted. You know who likes cupcakes and Champagne? Everybody, that's who. After our aperitifs, we headed to Portobello for a special meal with VN contributors. Chef Aaron Adams blew us away with his inventive, locally sourced, phenomenally delicious cuisine. Check out a course-by-course recap by our Raw Done Right columnist, Gena Hamshaw at Choosing Raw. A stellar, four-hour meal shared with brilliant colleagues? Things really don't get better. 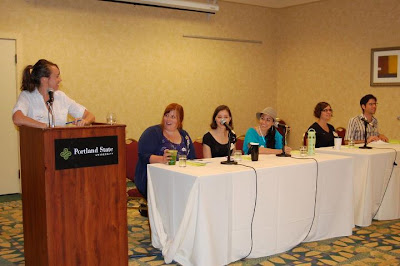 Colleen moderates the Travel Panel
Saturday and Sunday we got down to business. The days were jam packed with the bulk of the conference. The panels were fantastic, the speakers engaging, the food demonstrations delicious, and the Galarama a ton of fun. With so many fantastic vegan bloggers in attendance, there's no shortage of great coverage of the individual panels; check out Vida Vegan Con's Facebook page for a roundup of recaps. For the visually minded, check out our Facebook gallery.
The panel was a total success, not to mention a blast. Kudos are due to the organizers—Jess Scone, Michele Truty, and Janessa Philemon-Kerp—who saw a need for something in their community, and took it upon themselves to fill it. It's creative, dedicated activism like theirs that will power the next phase vegan living, in whatever form it takes.
Posted by VegNews Magazine at 3:01 PM

That is an awesome experience I wish I could have the chance to attend such an event. I am a vegan and this sort of event is relevant to me.