The Scoop: Minutes after moving to Berkeley with my husband, yellow lab, and three-legged cat, I knew I had made the right decision. Not only are there vegan cinnamon buns (Cinnaholic, I heart you), there is a vegan charcuterie platter at Gather that will make you squeal. Even better, Berkeley just hosted its very first Vegan Earth Day at the University of California Berkeley, an event that combined environmentalism with veganism. Karine Brighten of Karine Brighten Events produced the evening with co-sponsors Berkeley Organization for Animal Advocacy, which included a screening of the documentary, Call of Life, a panel discussion, and a reception catered by Millennium and Local Love. 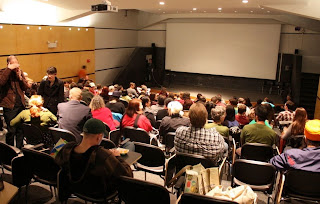 Moments before the screening. Photo: Whitney Lauritsen.
The film was eye-opening to say the least. The producers interviewed several university science professors from UC Berkeley, Stanford, Yale, Duke, and other schools about the growing threat to the Earth's life systems and how all species are interconnected. The film warns that factors such as over-consumption of meat, global warming, and deforestation are killing more species than ever before. A fascinating fact that I didn't realize is that when salmon travel back and forth from their breeding grounds, they carry important essential elements that helps the bears that eat them and the surrounding trees survive.
After the screening, four panelists—Hope Bohanec (In Defense of Animals), David Vlansey (Call of Life executive producer), Lauren Ornelas (Food Empowerment Project), and Alex Eaves (Stay Vocal)—spoke about veganism, the environment, food choices, and even how T-shirts can be an environmental hazard. Eaves shared a personal story of how he used to collect T-shirts at an alarming rate. He wore a different T-shirt every day from his collection and it took him more than a year before he went through all of them. After discovering how much waste is made just from making T-shirts (about 400 gallons of water to grow enough cotton to make just one brand new T-shirt), he launched the clothing company Stay Vocal that is 100-percent reused attire.

Sushi provided by Local Love. Photo: Whitney Lauritsen.
After the discussion and Q&A moderated by Rose Aguilar, host of local radio show Your Call, we were invited to a small reception and venue area to meet local vendors and organizations. My husband Brendan and I snacked on a new vegan nacho cheese from Nacheez and ate some tasty appetizers from Millennium while perusing the booths. The reception was jam-packed—you know how much vegans love food—and there were tons of happy vegan chatting it up and getting to know each other. Whitney Lauritsen, aka Eco-Vegan Gal, was the event photographer and documented the whole evening beautifully. After we left Brendan and I were still talking about the film and how we would re-think our consumer choices. We're both so happy that we moved to Berkeley, and I'm really looking forward to Berkeley Vegan Earth Day next year.
Posted by VegNews Magazine at 10:50 AM

Nice blog posting. Thanks for sharing such information with us.