When: Outside Mission Bicycle in San Francisco

Why: Nothing's better than tasty treats for a great cause!

The Scoop: I love eating baked goods, and have yet to encounter anything too sweet for my sweet tooth. But what I love more is baking for a cause that’s other than filling my stomach. Cupcakes for Choice, organized by Laura Hooper Beck of vegansaurus.com and Robin Doolin, and supported by dozens of volunteer workers and bakers (myself included), all started because Congress voted to cut Planned Parenthood off from federal funding. Thank goodness for government checks and balances; at least now we can hope that the Senate doesn’t let this pass! In the meantime, as the Cupcakes for Choice event site notes, “we’re taking our anger and turning it into something good.” Since I know several women who don’t have health insurance and rely on organizations like Planned Parenthood for reliable healthcare, I decided to join in and spend my Sunday morning baking two-dozen cupcakes. 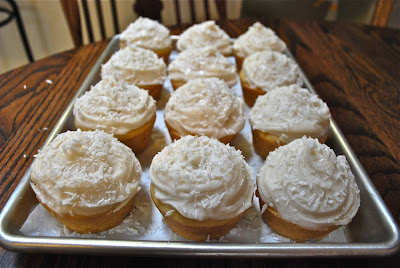 My beautiful (OK, I love them too much) vegan vanilla coconut cupcakes!

Sure, my kitchen got ridiculously messy and I woke up four hours earlier than I normally would, but it was completely worth it. As the boyfriend and I arrived outside Mission Bicycle on Valencia, we were greeted by rain and a smiling Laura Beck. It wasn’t exactly the weather we’d all been hoping for, but the table of baked goods was growing and looking better with every donation. A crew of UC Berkeley journalism students were also there with their cameras, ready to film the event’s every action and interview people on Planned Parenthood work and Congress’ decision. I overheard one girl saying that the House of Representatives was “turning back time and making archaic decisions.” I wholeheartedly agreed as I packed a box full of whoopie pies, doughnuts, cupcakes, and cookies—which all happened to be vegan—and handed my money over. 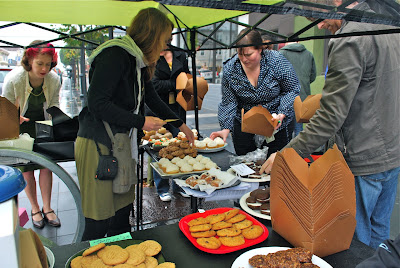 Even with the rain, people were drawn in. By the end of the four-hour bakesale, my beautiful cupcakes were gone, and Cupcakes for Choice raised a total of $1,500 for Planned Parenthood! Here’s to more events that help raise money for those who need it most!

Posted by VegNews Magazine at 12:00 AM

I was just a meanie to all of the people wanting more babies and more climate change :(
I yelled at them while driving by, that they were murderers because they ate meat.
Bad me.
It was a "F**k Yoga" type of day.