Who: VN Managing Editor Elizabeth Castoria and Associate Publisher Colleen Holland
What: A week of yoga and vegan food on the stunning Pacific coast of Mexico
When: November 26 to December 3, 2011
Where: Haramara Retreat, Sayulita, Mexico
Why: Because I was invited!

The Scoop: When Colleen first told me about the idea of hosting the VegNews Vegan Yoga Retreat the week right after Thanksgiving, my first thought was, YES. Being warm is my lifelong project, I love yoga, and the food was guaranteed to be amazing, so I could totally not have been more thrilled to co-host (along with Colleen and the incredible co-creator of Laughing Lotus Yoga Centers, Jasmine Tarkeshi) this trip. 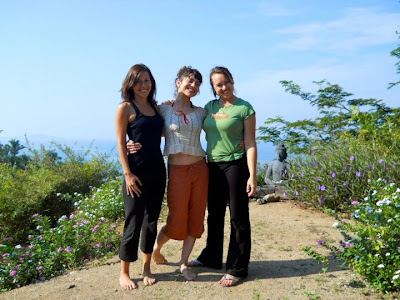 Me, Jasmine, and Colleen, aka the luckiest gals on the planet


Despite my initial excitement, nothing could have prepared me for just how phenomenal the trip would be. Haramara is situated on a hillside in the thick of the jungle that plummets to the beautiful Pacific Ocean. There isn't any electricity in the luxurious casitas, so everything is lit at night with highly atmospheric oil lamps. The pathways around the retreat are covered in natural arbors of vines and bouganvillea, and the sea sparkles constantly at the bottom of the hill. The scenery alone would have been enough to qualify the place as paradise, but there were a few other things that nearly killed me with ecstasy. The group of people who joined us on the trip could not have been more wonderful. From hard-core yogis to folks who just wanted a little getaway, everyone who came with us was a total delight—it was truly an honor to spend the week with each of them.

Oh, and then there was this little thing called the food. Holy heck! The entire kitchen at Haramara went vegan for the full week that we were there, and, under the direction of the highly talented Chef Hugo Gutiérrez, the staff created show-stopping meals three times a day. Were there three courses for each of those meals? Yes. Does the project of feeding myself now seem utterly hopeless because I can no longer just show up at the right time and be spoiled rotten with fresh, elegant cuisine? YES. If it were possible to clone Chef Hugo and have one of him cook for me in SF, let's just say I'd be largely unconcerned with the moral or ethical implications of cloning. 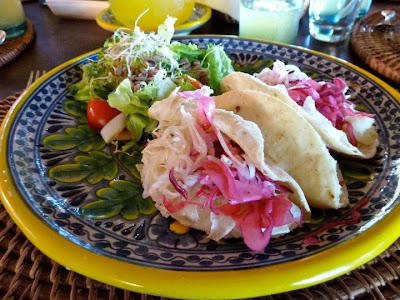 Hello, amazing vibrant veggie tacos and fresh salad
Jasmine led us in four hours of yoga every single day, and though I've practiced off and on for the last 10 years, I'd never connected the dots between the founding principles of yoga and veganism. It was a truly revelatory experience to learn from Jasmine not only how to attempt a crow pose, but how these two non-violent principles are interwoven. As someone who's only ever thought of yoga as a nice way to work up a sweat, I'm now so excited about deepening my understanding of the practice's more-spiritual side. The week at Haramara left me rejuvenated, relaxed, and really ready to go again next year! A huge thanks to everyone who made our first yoga retreat such an amazing experience. To check out many, many more photos, don't miss our Facebook gallery.

The retreat was a transformative experience, and it makes an appropriate final post for Press Pass. Yes, after four years of out-of-the-office adventures with the VN crew, we're moving away from the format of this blog. Keep an eye out for new ways to keep up-to-date with our after-hours escapades in early 2012. From all of us at VegNews, thank you for reading!
Posted by VegNews Magazine at 12:12 PM

Soooo sad to see you go! but that is a beautiful way to end the blog (which I btw really enjoy!)

Yoga retreats have become increasingly popular as they offer fantastic health benefits, claiming to leave you feeling relaxed, centred and rejuvenated. Thanks a lot.


We bumped into your blog and we really liked it - great recipes YUM YUM.
We would like to add it to the Petitchef.com.

We would be delighted if you could add your blog to Petitchef so that our users can, as us,
enjoy your recipes.

Petitchef is a french based Cooking recipes Portal. Several hundred Blogs are already members
and benefit from their exposure on Petitchef.com.

To add your site to the Petitchef family you can use http://en.petitchef.com/?obj=front&action=site_ajout_form or just go to Petitchef.com and click on "Add your site"

Delicious tacos and salads! Looks like you had a great experience!