What: The San Francisco Street Food Festival
Where: The Mission District, San Francisco, Calif.
When: August 20, 2011
Why: To discover the best vegan food from street carts and food trucks from San Francisco and beyond!
The Scoop: A few weeks ago, I received an invitation to the media dinner for the San Francisco Street Food Festival. Free food, drinks, and swag bags? Count me in. I had the privilege of meeting chefs and dining in style with many interesting professionals working in the food and media industries. The cocktails? Creative and delicious. The presentation of all things edible? Detailed and beautiful. The service? Prompt and efficient. But the main draw of the dinner—the food? Lacking in veggie options, to say the least. Basically, all I ate during the 10-or-so course meal was some fresh, spicy salsa from Zepeda Foods and amazing roasted lemon and thyme hummus from Love & Hummus Co. atop crunchy cucumbers. That said, the dinner was still a ton of fun, but I knew that, coming from one of the most veg-friendly cities on the planet, San Francisco street vendors could do better for vegan foodies than just salsa and hummus, delicious as they were.
So on Saturday morning, I strutted into the third-annual San Francisco Street Food Festival bright and early. A woman on a mission, I was determined to check out every delicious veg option available from the more than 60 vendors feeding the hungry masses. And man, did I eat.
My date Jeremy and I started the sunny day off right by getting our drink on. A bartender carefully mixed my choice summer cocktail—the Poloma. Like a grapefruit version of the margarita, this refreshing, sweet'n'salty drink made with Espolón tequila (my favorite!) paired well with some gourmet, crunchy summer farmers’ market pickles, with just the right amount of sourness, from Il Cane Rosso.
Next, we hit up Azalina’s Malaysian for a fried peanut taco. Filled with a surprisingly spicy mix of peanuts and tofu, the deep-fried taco oozed with greasy deliciousness, and was easily the most memorable meal of the day. I was ever-thankful to have bought the ruby red sharbat, a refreshing blend of coconut, lime juice, and rosewater, as my mouth was practically on fire and waiting in Azalina's long line again was out of the question. 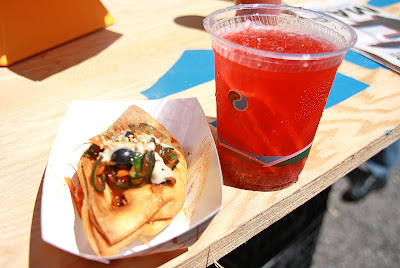 The samosas from the Bay Area’s first Indian street food truck, Curry Up Now, took me right back to India, where I spent the spring of 2010. While my classmates were worried about getting food poisoning, I openly embraced (and risked) chowing down on the hot, ready-to-eat samosa, pakora, and tikki, cooked up right on the streets of New Delhi. Curry Up Now’s giant, crispy samosa filled with seasoned potatoes and peas, was heavenly. A bottomless pit, I could’ve eaten at least five more, but I refrained, and my health thanks me for it.
For lunch, I tried Ethiopian food for the first time ever. As one of the few vendors offering an entirely vegan selection, Eji’s Kitchen served up Shinbra Butacha cakes, thyme tea, and spicy lentils and cabbage. I chose the lentil-cabbage combo, served in the traditional manner atop injera, a large, sourdough flatbread. Eji’s helpful chefs explained the utensil-less meal to those in line, letting everyone know that Ethiopian food is to be eaten with your hands by pinching the fillings with the bread. 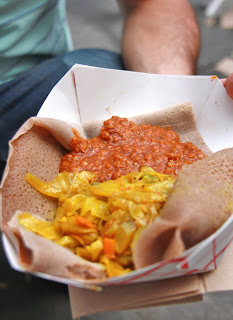 While the sweet and sour cabbage was well-flavored, it still tasted like cabbage, a vegetable I find rather unappealing. As a major fan of lentils, I enjoyed those quite a bit. They tasted a lot like traditional Indian lentils, but with a smokier flavor. The injera was like a sour crêpe, which was good, but so filling that I struggled to consume all of it, even with Jeremy’s assistance. My mission was foiled; my seemingly bottomless pit of a stomach was betraying me—I was full.
So while I didn’t try everything, the San Francisco Street Food Festival fared well for me—Wallet empty, my belly full, and still plenty of veg-options (like the cauliflower kati roll and the Mexican spiced hot cocoa!) to dream about before I hit up the festival again next year. Mission accomplished.
Posted by VegNews Magazine at 2:00 AM

sounds like fun! ...makes me want to go next year!

Those tacos sound amazing! How fun to go somewhere with so many veg options.