Who: Office Manager Lyndsay Orwig
What: A celebration of The Blooming Platter by Betsy DiJulio
Where: Millennium Restaurant San Francisco, Calif.
When: July 14, 2011
Why: To recognize another great vegan cookbook on the market, and to eat delicious food.
The Scoop: As you may have seen from my previous posts, I'm a huge fan of all things Millennium. Although, even though I post about it frequently, I actually don't go there very often. I only live two blocks away from the place, but it is definitely a rare treat. And this occasion was a special treat, indeed—a wine and dinner reception dedicated to Betsy DiJulio, and her new cookbook, The Blooming Platter. It is Betsy's first cookbook, and one that started from her blog of the same name. I was very excited to meet the lady of the hour, check out her new book, drink some good wine, and eat some delicious food. 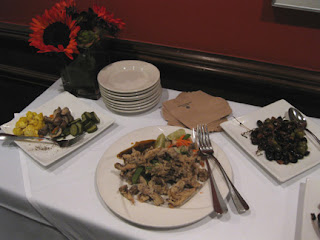 The spread of appetizers.
We dined in the exclusive wine room, where we started with some amazing appetizers, including house-made pickled vegetables, herb marinated olives, and the Crusted Oyster Mushrooms—my personal favorite. Betsy and I chatted about both being from Virginia Beach, VA. Before moving to California in 2008, I grew up in the Hampton Roads, where she currently lives, and she teaches high school art. We were amazed by the connection and spent almost half of the night talking about the city, which I greatly miss. 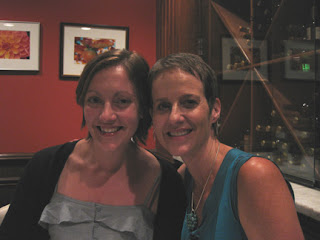 Me and the lady of the hour
After downing the appetizers and socializing a bit, we were asked by our hostess, a close friend of Betsy's, to sit down, and before we began the rest of our meal, she gave a formal introduction of Betsy, then turned the speaking over to her. We learned of how she landed her cookbook deal, which was from her blog. What is really fascinating is that she didn't even venture out to get the deal on her own, but was instead contacted by the publisher through her blog. It just goes to show what a blog can do for you these days. She talked about how she comes up with recipes, making us very hungry in the process, and then finished off with giving our hostess a beautiful painting, which Betsy made herself. It depicted symbols from both the Hampton Roads and San Francisco, and was quite powerful, especially since I've lived in both placed myself. The presentation came to an end and the feast began! 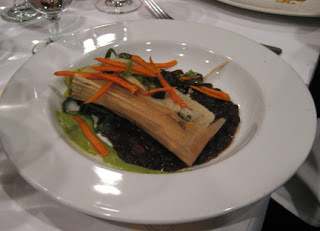 The  Huitlacoche Tamale
The first course was a Grilled Lemon-Herb Salad, and then for the entrée, we were able to choose between three options: The Macadamia Nut Crusted Tofu, the Roasted Beet and Hazelnut Barley Cakes, or the Huitlacoche Tamale. It was a tough decision, but I finally went with the tofu. Luckily, my boyfriend, who was my guest, chose the tamale, so I was able to have a little taste of that delicious entrée as well. We finished the evening with one of the most popular desserts at Millennium—the Chocolate Almond Midnight. It was actually my first time trying this popular dessert, and I was absolutely blown away by how rich and decadent it was. 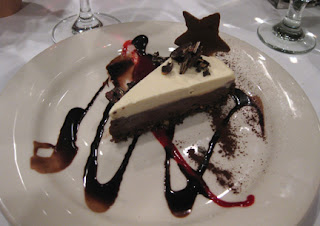 
It was a wonderful night, which I was so happy to be a part of. Betsy DiJulio is a lovely lady, and I see some other great cookbooks—and gorgeous artwork—in her future. Maybe another amazing night at Millennium as well? I'll be the first to RSVP.
Posted by VegNews Magazine at 9:00 AM

Oh, Lyndsay, you have so generously captured a very special night indeed. Thank you for being a lovely part of what made it so. I am incredibly honored that you were so thoughtful in your overview and, heck, that you even thought the evening worthy of a Press Pass entry. I never saw you taking notes, but you remembered so many details. (Those mushrooms...!)

If you'll allow me one clarification, I just want to suggest that other bloggers--on any topic--interested in writing a book should take a proacive stance. My publisher found me through my blog, but in researching his company in response, I noticed that they were accepting proposals and thus began our exchange initiated by me. After some pleasant and informative back-and-forth and my expression of interest, he did invite a proposal, but would-be authors should definitely not wait for the doorbell to ring or, rather, the alert buzzer on their computers to sound!

Thank you for celebrating with me and for your gracious support of me, The Blooming Platter, the Vegan Heritage Press, and even my artwork! Meeting you and visiting the VN offices was a highlight on a trip full of memorable moments, an embarrassment of riches, as I've said many times in the last few months.

I hope we share another meal and some conversation...on either coast. If you come visit your brother, I trust you'll let me know!

My best to you and VN!

Lindsay, It was great to meet you at Betsy's dinner! My daughter and I had a fabulous time.

I'll be bringing my husband back to San Francisco in August to take him to Millenium, and I think we'll be trying Gracias Madre as well!

Thanks for being such a fun part of the dinner!