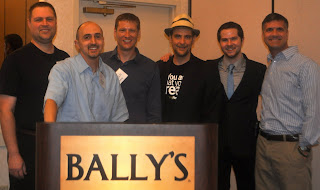 The United Brotherhood of Vegans: Chef Jason Wyrick, Jack Norris,
Ryan Henn, Joseph Connelly, Dan Mims, and Lt. Col. Robert Lucius
The Scoop: Vegans in Vegas organizer Ryan Henn's brilliant idea was "the first event designed for vegan and veg-interested men." A vegan bachelor party! In Las Vegas! Bring vegan men together for some brotherhood and bonding, y'know, 'cause being a minority within a minority ain't easy. VegNews jumped on as the title sponsor, and the next thing you know there was a wild four-day orgy happening in sin city that was going to ruin (or improve!) vegans reps forever.

VinV might have strayed slightly from original concept (about half of the attendees were women) into unique conference, yet in the end was still a first for Vegas. How so? I've been to more vegan conferences then, well, probably anyone, and I've never attended a class by a professional poker player on how to win at Texas Hold-'em (though there is one summer conference that will remain unidentified in which there is an annual Hold-'em tournament). Ed Miller, Vegas' resident vegan poker pro and author of five poker books, attempted to teach attendees the basics, and graciously donated his book sales to Mercy for Animals.

What else did you miss? The conference was a blend of the expected lectures from stalwarts including myself, Mercy for Animals' Nathan Runkle, and Vegan Outreach's Jack Norris, plus new faces such as Jim Morris, the 75-year-old former Mr. USA/Mr. America/Mr. Universe who has not fathered a secret love-child with his former housekeeper (as far as we know) and Lt. Col. Bob Lucius, the marine-turned-vegan building humane communities around the globe through his Karios Coalition. 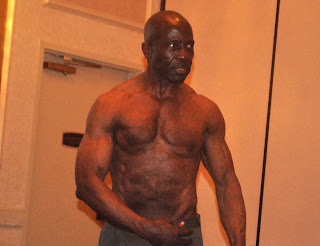 Bodybuilder Jim Morris lost his shirt while in Vegas. He turns 76 in August.
How many other veg gatherings offer dueling piano bars; Purple Reign, a Prince (he's vegan, you know) tribute; or Improv at Harrah's Casino? None. We also dined at one of newly vegan Steve Wynn's restaurants, Wazuzu, inside the Encore Hotel (all of the restaurants in Wynn's hotels have vegan menus) and learned to cook via demos by Chefs Stacey Dougan and Jason Wyrick, the latter of The Vegan Culinary Experience, another event sponsor. Yes, a bachelor party with break-out cooking lessons. I did say it was unique! 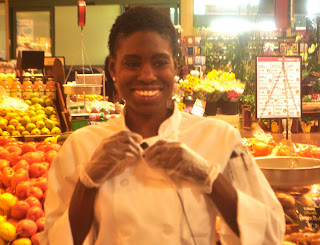 Chef Stacey Dougan gives cooking tips at a local Whole Foods Market
Vegans in Vegas was original, fun, and a welcomed event in a city not exactly known as a vegan destination. Ryan Henn is changing that, helping to put Vegas and VinV on the "Bucket List" of must-do's, a conference you shouldn't miss. Let's all hope he decides to roll the dice again next year.
Posted by VegNews Magazine at 9:58 AM

It's like no one there knew how to fix their camera settings. It's 2011, how is that possible?

At first we thought of having a vegan bachelorette party at the same time, to give the girls something to do - but I'm so glad we didn't!

Vegans in Vegas was awesome, well balanced with speakers and social events, and a treasure trove for making great new vegan friends. I am looking forward to next year's encore!

OMG, the bachelorette party idea was going to be an actual party, not a 4 day event with speakers and dinners and such. It was going to take place at the same time as Ed Miller's poker lecture and it was going to involve (nearly) naked men. What's wrong with you, Ina!?!?!?!?! It would have been FANTASTIC!

You Vegas women crack me up!