Who: VN Managing Editor Elizabeth Castoria and VN Associate Editor Jennifer Chen
What: The Humane Society of the United States' annual awards ceremony for the media and entertainment industry
Where: The Century Plaza, Los Angeles, Calif.
When: Saturday, March 19, 2011
Why: To celebrate reporters, entertainers, and animal advocates who keep animal issues in the media spotlight
The Scoop: Twenty-five years ago, former Broadway actress and animal-activist Gretchen Wyler founded the Genesis Awards. At the time, a few awards were given out. Now, the awards have grown to include feature films, reality TV, talk shows, and TV news. The Genesis Awards honors journalists, media, and entertainers who lend their creative skills, celebrity status, and hard work toward awareness of animal issues. It's hard to believe that this phenomenal evening of star power has already been around for a quarter century, and even harder to believe that there was ever a time when it didn't exist.

It was my first time attending, and I was so excited to meet some of my favorite animal advocates, particularly Genesis award-nominee Victoria Stilwell, star of Animal Planet's It's Me or the Dog. Stilwell is a staunch supporter of animal shelters and adopting rather than buying a companion animal, which is a cause close to my heart. 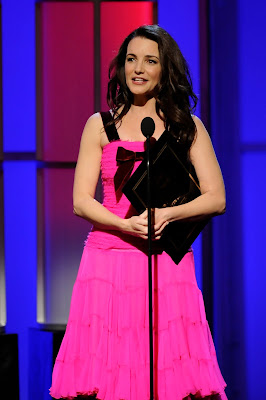 Davis, accepting her Wyler award
Top winners of the night include former Sex & the City star Kristin Davis, who was honored with the prestigious Wyler award (named after Genesis Awards founder, Gretchen Wyler) for bringing media attention to the plight of orphaned baby African elephants who are abandoned after their parents are poached for their ivory tusks. Davis graciously thanked the David Sheldrick Wildlife Trust for its work on behalf of elephants, including caring for a 250-pound baby elephant Davis and her friend rescued while on safari in South Africa. Other winners include HBO's True Blood for their dog-fighting storyline (dog star Dusty made a special guest appearance on stage), How to Train Your Dragon for feature film (to which supervising animator Gabe Hordos, credited his adopted cat for helping him create such a lovable dragon), and the The Oprah Winfrey Show for a show covering dolphin slaughter. Stephen Colbert gave a tongue-in-cheek virtual acceptance speech for winning the Sid Caesar Comedy Award for a segment on bull-fighting. He quipped, "I want to thank you for this honor and also congratulate you for honoring me."
While most of the animal segments covered upsetting issues like puppy mills, factory farms, horse slaughter, and other forms of inhumane treatment, I was thrilled to see wonderful advocates being honored from local news reporters to top stars like Davis. Presenters included the ever-lovely and vegan Emily Deschanel, Tricia Helfer, Betty White, James Cromwell, and Ed Asner. It was a treat to meet HSUS President Wayne Pacelle, hard-working HSUS directors, and fellow animal advocates. 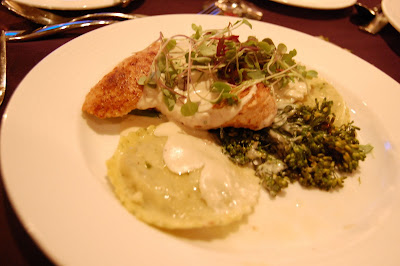 The delicious main course we wish we were still eating.
Our vegan meal was prepared by vegan celebrity chef Tal Ronnen and our main entrée featured chantrelle-dusted Gardein chicken, broccolini, and chantrelle-stuffed ravioli topped in a beurre blanc sauce. We nearly died. A fantastic after-party featured a silent auction benefitting HSUS, and I was fortunate enough to win my bid on a gorgeous olive green Vaute Couture coat. A veritable vegan spread awaited us with cupcakes, quesadillas, even Tofutti cream cheese-stuffed jalapeño poppers. Elizabeth and I chatted with Brendan Brazier, Carolyn Scott-Hamilton, the gals at Compassion Over Killing, and Gardein's R&D chef, Jason Stefanko.
Animal Planet will air the awards ceremony on April 30 at 7pm EST/PST with an encore on May 1. Pacelle sums up the night the best when he said, "At the end of the day, I'm hopeful because ... there are millions of others who share our passion." I couldn't have said it better myself.

Don't miss our photo gallery from the glitzy evening, and you can see the official photos from HSUS on Flickr.

What a fantastic event! Thanks for recap and sharing photos. That meal does look pretty amazing! Kudos to you for scoring the Vaute Couture coat!! :)

I'm disappointed in your enthusiastic mention of Victoria Stilwell. This is a person who advocates behavior-based euthanasia for dogs she doesn't understand how to help. She routinely recommends drugging dogs that don't respond to her often-nonsensical advice to their well-intentioned owners. On her TV show she is repeatedly seen being dragged about by people's dogs on their leash, showing she doesn't even know how to walk a dog. Dogs jump all over her, even pee on her, showing how little respect they have for her remarkable lack of knowledge. Animal Planet does dog owners a great disservice by presenting her pompous majesty as someone with actual expertise, since owners who try her suggestions and fail to achieve the desired result often just give up, thus dooming what should be a good relationship with their dog to a lifetime of frustration. You never see her in public with her one dog, a chocolate lab, because she can't handle even that -- she admitted it in a 2009 Washington Post blog 6 months after getting it, the one and only dog her family has ever owned. The woman is a fraud who should be exposed as such, and certainly not admired.