Who: VN Publisher Joseph Connelly
What: San Francisco Premiere of Skin Trade
Where: Roxie Theatre, San Francisco, Calif.
When: June 15, 2010
Why: Fur is Dead
The Scoop: Exactly 10 years ago the acclaimed anti-fur documentary The Witness debuted, winning multiple festival awards while igniting the second wave in the war on what's wearable. The fur industry, left for dead in the '90s, was making a comeback in the new millennium; the gains made over the previous two decades educating the public on the horror that is fur were beginning to slip away.
Another decade has whizzed by, and fur fashion—like vampires—is the new undead, though the same can't be said of the pelts or the animals who used to own them. What can be done? Take an animal-rights-lawyer-turned-filmmaker, mix in a video editor who moonlights as a musician, and you have the latest vanity-be-damned documentary, Skin Trade.
Shannon Keith, Skin Trade's director, founded ARME (Animal Rescue, Media, and Education), the non-profit behind the film. (ARME's first production, Behind the Mask, is an award winning 2006 documentary about the Animal Liberation Front.) Gene Blalock, singer/songwriter of the LA-based alt-rock quartet The Faded, edited Skin Trade while writing much of the original music for the soundtrack. Thankfully these multi-talented overachievers pooled their skills to produce ARME's second killer doc. 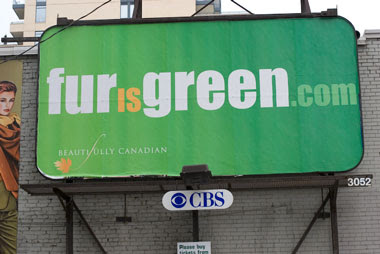 The fur industry's latest PR move, proclaiming fur is green, gets debunked in Skin Trade.
Skin Trade begins by stating that the fur industry exists because everyone involved in it is a bold-faced liar, then proves so by alternating hidden camera footage of furriers telling prospective customers that the animals are treated better than household companions with undercover film of what really goes on. Interspersed throughout are interviews with pro-compassion celebs (Congressman Dennis Kucinich, designer Todd Oldham, Ingrid Newkirk, John Salley, Rory Freedman, Rikki Rocket, and more) questioning how this can still be going on. 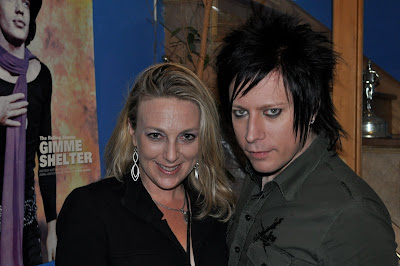 Director Shannon Keith and Editor Gene Blalock in San Francisco
Keith and Blalock were in attendance last night as the film screened at the San Francisco United Film Festival to a very supportive and moved audience. Skin Trade includes some graphic imagery, always with ample foreshadowing, and needs to be seen by a wide audience. If you are not yet fur free, please watch this film through to the end. If the scenes of what's happening in present day China don't move you, it's time for a heart transplant.
View the trailer for Skin Trade here.
Posted by VegNews Magazine at 7:04 AM

nice one, joe. i'm almost always extremely proud to be canadian. but i'm beyond shamed to see the big "beautifully canadian" "fur is green" billboard.

Saw it last week with the gang. Such an important film! Glad you got to see it.